We shape our buildings, thereafter they shape us.
– Winston Churchill

Humans are dependent on space. As our population expands, it grows scarce. Individuals in this economy, in this world, and these cities make sacrifices in order to create with or without a space. They rent apartments with their partners, often becoming codependent in order to sustain. I know a number of couples who initially lived together out of necessity rather than desire. Our home is a container and enabler.

My father is a contractor. He has remodeled homes my whole life, shapeshifting the architecture to suit those who could afford it. They were mostly tech industry folks, businessmen and women; those who were buying houses before the bubble burst in California. They would turn one bedrooms into four bedrooms and single stories into three stories with giant windows and high-tech security systems. They were dependent on these remodeled and renovated structures as symbols of their status. Their weekend getaway.  I used to house-sit or pet-sit in the summertime for these strangers while they were abroad or on business excursions. I always lived in fear of breaking a glass, not locking a door, or their cat disappearing. But I loved swimming in their pools and eating the fruit off of their trees. They often had acres of open space to roam through where time would slow down and you could breathe.

Now I live in a six story building in the center of Seattle, on the cusp of downtown by the freeway, next to the Capitol Hill neighborhood. Our building was constructed in the nineteen-twenties out of brick and wood. It has since been retrofitted after a major earthquake hit the Puget Sound region.  Each of the apartments are slightly different from one another. They rise up vertically as duplicates. Our kitchens and bedrooms horizontally mirror one another. We have walk-in closets, wooden floors and varying color combinations of tile. We are given permission to paint the walls any color we choose; which can be good or bad for the next tenant depending on taste. If I take a shower at the same time as our neighbor, the hot water pressure decides on a winner or loser in the game. My neighbor has to work at 9am, and I at 8:30. I can avoid losing by five minutes if I am not running late. He and his partner are both artists who work on a small scale, they both have day jobs and their home is also their studio. Their living room is slightly smaller than ours and their bedroom is slightly larger. I only noticed this for the first time when I watched their cat while they were on holiday.

Our apartment is a one bedroom unit. We have lived in two other units in the same building over the years: two studios, one shorter in length than the other. Living in a studio I’ve grown used to my bedroom as my office— the bed is my desk where all emails are written and events are planned. I now sit on my bed typing this while our living room is being utilized as a painting studio by my partner. It is  also often cleared out for an evening to house local visual art. It is our brick and mortar, it is what we can do—enable artists to create installations and inhabit our space temporarily. The exhibitions are for us as much as they are for everyone else. It is how we connect and share. Our home is a necessity as is our gallery.

City living speeds up time. It is an organism. We reconstruct, deconstruct, construct  and alter constantly; the streets, the blocks, the parks, the highways from two lanes to four lanes to one-way streets to bike lanes. I’ve watched my neighborhood lose blocks and sidewalks for months to years while large condominiums are constructed.  Made of affordable materials such as glass and metal they reflect the grey skies surrounding them and cast shadows upon the older brick buildings below. When viewing into their windows I see large flat screen TV’s constantly aglow. As a species, we have grown to need these buildings; their shelter, their volume, their stature. We accumulate objects to fill their vessels: a bigger couch for a larger living room, more bedding for more bedrooms, more children for those bedrooms. Then we might find ourselves with grown children and a large space unnecessary to our needs. We downsize in preparation to leave our own vessels, our bodies.

Now following suit with New York, London, and San Francisco. Seattle's buildings we once thought would always exist are being bought by developers only to be gutted and altered permanently in our time. Some are nostalgic for what was familiar, for the petite and modest volume.  But these changes are not new. The compact buildings we now miss were once large masses constructed over forests and  fields in the past. We are not the first to experience this. We did this to tribes who lived in open space for centuries before. They were either nomadic, or they created homes that would disintegrate into the earth if deserted. They lived off of the land and understand space as open planes, and as a place in which you connect with the earth. 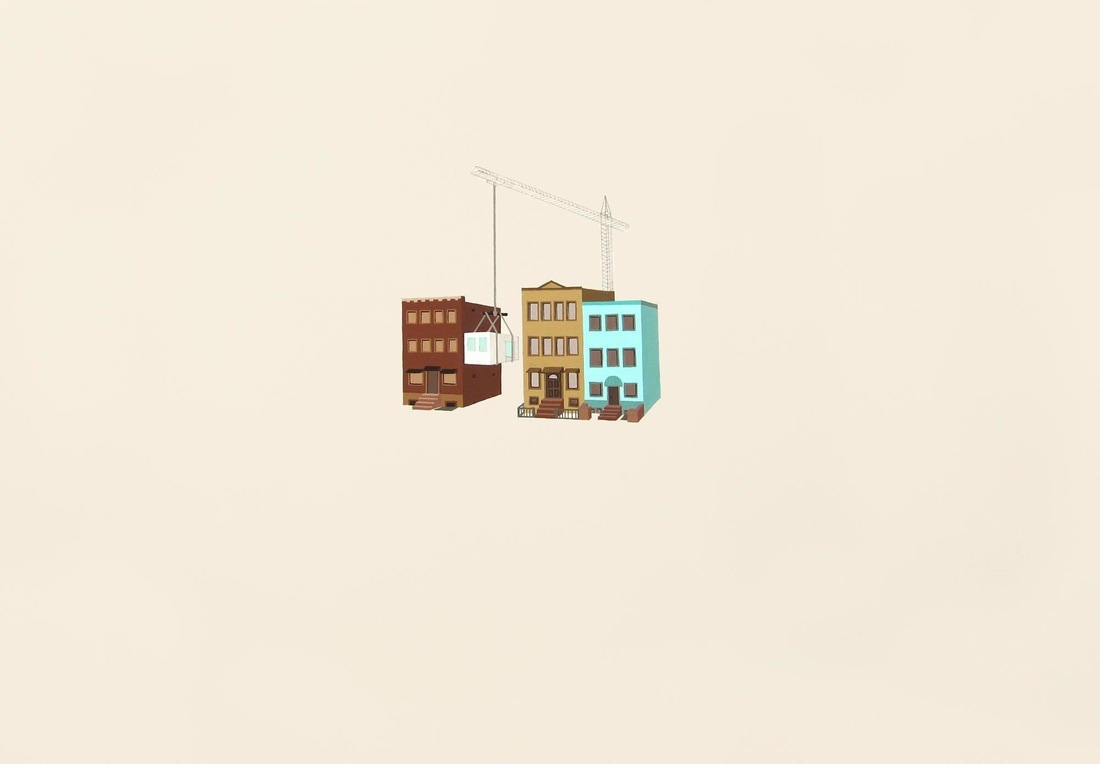