​We are delighted to present Seattle artist Julie Alpert’s solo exhibition, Garbled Love Letters, at Bridge Productions this May. The prominent feature of Garbled Love Letters will be three large pieces in painting and collage from her Bows and Drips series. Each piece overflows with colorful bow-ties, ribbons, and bursts of pattern; literally dripping with bright paint and ornamentation. Also featured is an installation of small, intimate watercolors floating across the length of a wall - the series this exhibition is named after. This body of small works pairs loose, airy, asemic writing and rhythmic repetition; articulating nonsensical language and playful patterns, as well as invented and actual symbols.

Alpert is best known for her large-scale installations which reference the overabundance of colorful, graphic imagery in contemporary consumer culture. In these installations, she essentially creates a three-dimensional painting out of color, shape, and pattern to be viewed from afar, while inviting us to to literally walk into the composition. In this way, we become participants in an up-close sensory experience. For her May exhibition, Alpert offers us a bit of distance to view things more two-dimensionally, playing with ideas of aesthetics, content, decoration, and meaning.

Garbled Love Letters began during Alpert’s summer residency at Virginia Center for the Creative Arts. This work is a response to the over-stimulation and distortion of conversations she experienced in communal spaces. As when we’re in a crowded room, bits of conversation rise up above the rest, and what’s heard may or not be what was said at all. Alpert’s observation of these crossed auditory wires and mixed signals lead to a body of work that was made in free-flow transmission, embodying a feeling of highly synaesthetic interpretation and experience of sound, movement, ambient noise, shapes, and letters.

​Alpert’s highly synthesized and near-psychedelic translation could be easily read as an analysis of the over-stimulating effects of media and social media. If the “media is the message”, then Alpert’s work delivers ornate packaging as mimesis to the effect of aesthetics and quantity over content in media culture. The effect being, ultimately, the originally intended message is overridden by the opulence of the package. Once we peel back the layers, however, the content is ultimately dissatisfying and isolating— perhaps it is our own messages that have been wrongly interpreted, misunderstood, or outshined altogether. Yet we continue, continuously translating in a bizarre game of Telephone. Information courses through an endless feedback loop — repeating through innumerable channels until finally only the symbols, patterns, and decoration remain. 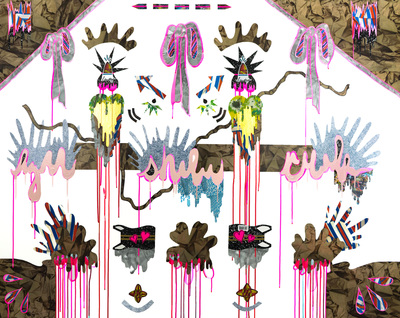 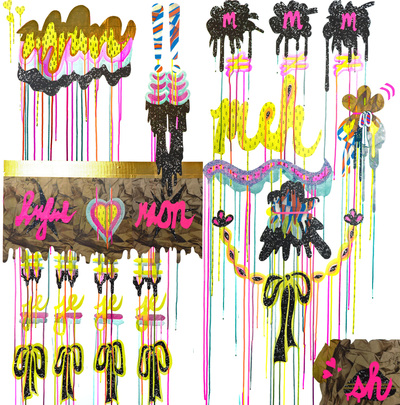 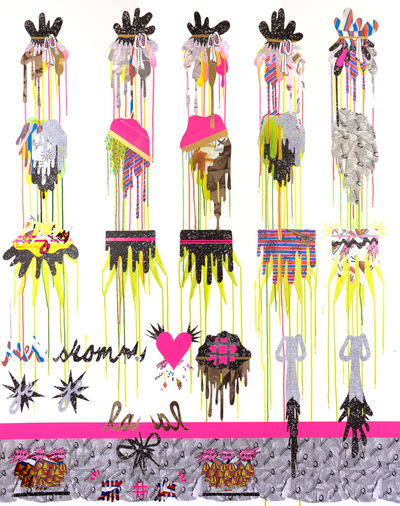