This essay by Emily Pothast accompanied our 2011 curated box set, Feedback Loop, featuring original work by Brian Cypher and Allyce Wood. This collaboration was a reference and testament to the invigorating analysis of self-referential loops in artistic works

Being is as it always has been and always will be: happening. This is the Current.

The Current has no qualities of its own. Rather it takes on the qualities of all that influences anything that happens. This is the modulation of the Current.

The Current is outside human control. (Indeed, it is the Current that gives rise to human consciousness and all its attendant illusions, including that of control.)

The Current wants nothing. However, the Current in the form of human consciousness wants survival, comfort, beauty and a whole host of other tangibles and intangibles, only a few of which it understands.

For a visual artist primarily concerned with representation in two dimensions, the blank sheet is, both literally and figuratively, a field of infinite possibility.

In Brian Cypher’s studio, the multivalent field of the blank sheet is quickly sown with a single intuitive gesture or remembered shape: a simulacrum of a pattern perceived by the mind’s eye. From here, the artist proceeds with a self-reflective program of mark making according to an invisible algorithm that is neither random nor deterministic. Through his efforts, the picture plane is deftly transformed into a matrix of interrelated, self-dependent patterning that often bears a (not coincidental) resemblance to the controlled chaos of video feedback patterns, occupying a position on the same continuum that includes psychedelic doodles and ecstatic cosmic diagrams.

For Cypher, filling the sheet (or in this case, canvas) is not a question of “what do I do next?” Rather it is an reflexive process of determining, given the qualities of the initial gesture and of the medium employed, how to best allow the ensuing pattern to grow and develop according to its own idiosyncratic logic. I have heard the artist refer to this internal logic as a piece’s unique DNA, the creative language of biological life. Like living things, Brian Cypher’s paintings are physical embodiments of the currents of self and circumstance.

Allyce Wood is another artist whose primary body of work consists of drawing that may be categorized, on one level, as intuitive and current-modulating. Her piece Habitancy, installed earlier this summer at the Mad Homes exhibition curated by Bryan Ohno, used assemblages of string to construct three-dimensional “drawings” that trace the hypothetical paths of people and pets who may have previously occupied the space as ghostly presences. But despite the hallucinatory, abstract effect of the transformation of space, the visual content of Wood’s work is always chosen for specific symbolic reasons, among them the complex network of relationships between humans and the rest of the animal kingdom.

For Bridge Productions/LxWxH, Wood has departed from the installation-based approach of her best known work in favor of a series of small watercolor paintings examining the possible human causes for a mass extinction of North American megafauna that occurred some 13,000 years ago. Citing ice-age hunting tactics that involved forcing entire herds of animals off of cliffs or onto ice flows in order to hunt them with relative ease but with devastating collateral waste, Wood deliberately emphasizes the role that human ingenuity may well have played in these mass extinctions.

On the one hand, this turn toward literal representation might be seen as a move away from the current-modulating practice I have identified as a common thread running through both Cypher and Wood’s work. On the other, it represents a shift in scale toward the understanding of whole patterns of biological history as currents, which humans are increasingly able to modulate by means of technology as well as moral reasoning: the ability to use imagined possible futures to inform decision making processes which may thereby transcend the lower level biological imperative of short term gain, which is often self-destructive in the long run.

By laying the “blame” for the cataclysmic extinction of North American ice-age megafauna (including well-known specimens such as the saber-tooth cat and woolly mammoth) on the too-successful hunting tactics of the newly dominant humans, Wood draws sharp parallels between the fate of these animals and our own. Humans are also classified as megafauna, I am told.

As above, so below.
-Alchemist’s dictum, first articulated by Hermes Trismigestus in the Emerald Tablet.

In the book I Am a Strange Loop, the 2007 follow-up to the deeply influential Gödel Escher Bach: An Eternal Golden Braid, mathematician and philosopher Douglas Hofstadter advances a rather poetic theory of how the subjective experience of a “self” arises from the gray goo of the physical brain. What we perceive as self-awareness is an illusion, Hofstadter speculates, generated by the complex interplay of a network of experience and memory information stored by our neuronal hardware looping back on itself to create emergent feedback patterns that the brain reads as a narrative of selfhood. It is this ongoing and open-ended current--rather than any monolithic [or, god forbid, immaterial Cartesian] “soul”—which may be identified as the seat of what we have come to identify as ego.

According to this theory, the artistic practices of certain individuals may be seen as both an extension and microcosm of the same forces which give rise to our very idea of selfness. To illustrate this point, Hofstadter points to a favored example: the music of Johann Sebastian Bach. When we hear a musical passage by Bach, do we not participate momentarily in the composer’s own subjective experience, hearing for ourselves the patterns of notes which must have first taken form inside his mind?

Indeed, whenever we experience something new that “looks like Picasso” or “sounds like Mozart,” what we mean is that we are identifying within the patterns of the experience a signature that recalls other works from the artist’s oeuvre with which we are already familiar. But we also mean that the artist in question is one who has so sufficiently distilled and codified the essence of “self” that others may thereby participate in his or her microcosmic feedback loop of subjectivity by means of the art experience. (After all, we would never know whether or not something “looked like Picasso” if Picasso himself had not dedicated so much of his time to the practice of refining and expressing what his art, as an expression of self, looked like.)

is the feedback loop that manifests itself as the characteristic work of a mature artist.

An artist is an individual who, by virtue of compulsively engaging in documentary activities surrounding his or her own feedback loop of subjectivity, provides us with a microcosmic roadmap of the nature of subjective experience. The creative “voice” emerges from the feedback loop of the artistic process much as the subjective experience of “self” arises as the by-product of so much recorded perceptual data by our neuronal hardware.

When I first encountered Brian Cypher’s work a couple of years ago, I was struck by the sheer evidentness of the feedback loop in which he was operating. While they may not share a palette or a single shape in common, every one of Brian’s paintings became immediately recognizable to me as a character in the same big story; a part of the pattern self-similar enough to produce a microcosm from which we may, in a sufficiently meditative state, deduce the whole.

As an artist in an earlier stage of her career, Allyce Wood is still, by her own admission, seeking her artistic voice. It is my opinion, based on the present paintings as well as earlier installations and her writings about her own work, that she is searching in a fruitful place: the self’s relationship to “not-self,” thereby calling into question our definition of “self.” Furthermore, Wood’s current investigations (or investigations of currents?) take a long, patient view of the patterns that give rise to our ideas of who we are.

How better to arrive at the heart of one’s own artistic practice by means of examining the myriad ancient ways in which human beings have attempted to exchange suffering for comfort, only to arrive at a higher level of suffering than we had previously thought possible?

Being is as it always has been and always will be: happening. This is the Current. 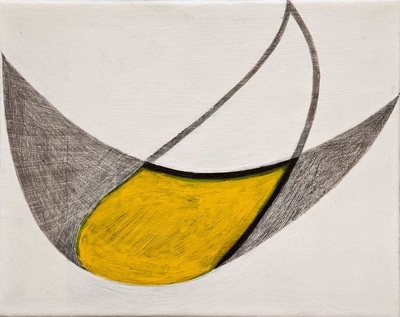 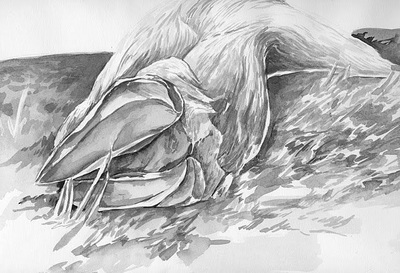 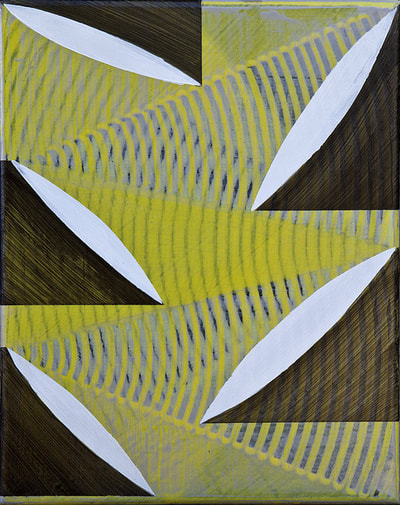 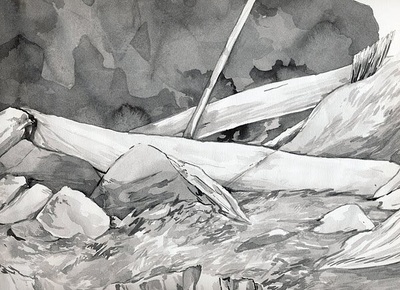