This December we’re delighted to present Julie Alpert and Andy Arkley’s immersive installation, Desert Daze, at Bridge Productions. The prominent feature of Desert Daze is a collaborative installation, including smaller detachable works created by Julie Alpert and Andy Arkley during a yearlong residency in New Mexico at the Roswell Artist in Residence Program. Both artists are well-known for their large-scale installations which reference colorful, graphic imagery and contemporary pop culture. In each of these installations, they construct a brilliantly executed three-dimensional “painting” out of color, shape, and pattern; inviting us to to step into the composition as participants in an up-close and abundantly sensory experience. In their second large-scale collaboration of this kind, Alpert and Arkley thwart the conventional artwork/viewer relationship to place us fully within the work, playing with ideas of aesthetics, content, spectatorship, and meaning.

In her 2016 exhibition, Garbled Love Letters, Julie Alpert’s Bows and Drips series took a prominent role, and continues to do so today. Each composition overflows with colorful bow-ties, ribbons, and bursts of pattern; dripping with bright paint and ornamentation alongside loose, airy, asemic writing and rhythmic repetition. These seemingly lighthearted pieces reference an undercurrent of the suppression and expectation of femininity, presentation, and behavior imposed on womxn through systems of patriarchy. They also  articulate nonsensical language and playful patterns, as well as invented and actual symbols. The use of this language evokes the experience of being a crowded room where overheard bits of conversation  may or not be what was said at all. Alpert’s observation of these crossed auditory wires and mixed signals is a throughline between bodies of work made in free-flow transmission, embodying a feeling of highly synaesthetic interpretation and experience of sound, movement, ambient noise, shapes, and letters.

In Desert Daze, Julie Alpert and Andy Arkley combine their efforts to translate visual information coursing through an endless feedback loop of media, fashion, design, and pop culture. This imagery is then regurgitated through innumerable channels until finally only the symbols, patterns, and decoration remain. Many of the abundant motifs that appeared  in Garbled Love Letters reappear in Desert Daze, riffing off a list of repeating symbols which continue to inform this new work: chains, roses, banners, drapes, words like “sm” (as in the abbreviation for small), and jazz hands; as well as the continued use of bows and drips. Also integral to the work is Alpert’s use of light and shadow as elements of the drawings, themselves.  As an exercise in restraint, creating a system of rules in which the artist circumnavigates restrictions as a catalyst for new inventions, the materials and palette were limited to craft paper, cardboard, sharpie, and colored pencil. Anchoring a significant figure on the wall as a kind of main character, Desert Daze begins to take shape.

This is Alpert and Arkley’s second collaborative installation. In the 2011 exhibition, Flat & Bright at SOIL Gallery, Arkley created an animation with original music, to which they each responded by building their own elements including drawings, objects, cutouts, and electronic devices. In Desert Daze, they’ve flipped the process so that Alpert has built the initial elements and arrangements, and Andy responds with his own drawings-turned-physical objects. These are then placed within and opposite of the installation, alongside freestanding drawings by Alpert, to complete this call and response.

Arkley’s objects were derived from working alongside Alpert in the studio to reflect on the work she had made, to translate the work through his own lens. Beginning with drawing, Arkley scanned the drawings into the computer to digitally manipulate and enhance them. Enlarged versions of these objects were brought back into the physical world using plywood and acrylic paint, applied with an airbrush. The effect of this application creates a kind of synthetic, graphic veneer that feels like a digital overlay, almost as if the work itself is a piece of augmented reality hovering en tandem with Alpert’s physical work. This creates a wavering line between what is real, and unreal; what is media and what is matter in what we see.

Rigorous in concept, theme, aesthetics, and execution, Alpert’s distinctive characteristics are embodied by a deep commitment to and fascination with form, color, light, and composition created through improvisation. Each new installation becomes enfolded into an ongoing  conversation with the lineage of installations that came before it; embracing the dark, menacing undercurrents of the work even as she navigates the playful lightness of it. In daily life we may feel unable to measure time, record, remember, or grasp onto the feeling of a thing in the ceaseless stimuli of 21st century life. Alpert’s work reflects these anxieties but gently, encouragingly, provides a space in which we can decode and deconstruct the message within and around our perspective, and in doing so, provide a much-needed respite in play and wonder.

Born and raised in the Washington, DC suburbs, Seattle-based artist Julie Alpert uses traditional art supplies and everyday materials in improvised site-specific installations. Her work explores decoration, disappointment, nostalgia and the trappings of femininity. She has a BA in painting from the University of Maryland and an MFA in painting from the University of Washington. She has received awards from The Pollock-Krasner Foundation, MacDowell Colony, Virginia Center for the Creative Arts, Artist Trust, The New Foundation, The Neddy Awards and Roswell Artist in Residence Program. From 2009-2014, Julie was a member of SOIL Gallery. She is represented by Bridge Productions in Seattle.

Andy Arkley is a Seattle artist, designer, musician and animator who often combines these disciplines in his work. He strives to make work that fosters inclusion, positivity and elation. Andy’s work has been shown at MadArt Studio, Gallery4Culture, Bumbershoot and Pictoplasma Festival. He has a BA from The Evergreen State College where he studied animation and electronic music. He has received awards from 4Culture and Artist Trust. He is the founder of the art team LET'S (now inactive) and a member of the sound collage band, The Bran Flakes.
For inquiries about Julie Alpert's work, please feel free to contact us. 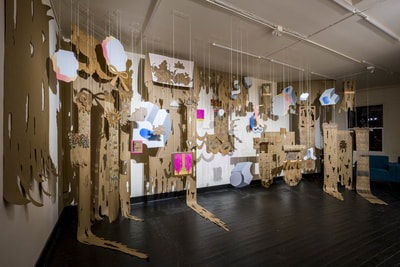 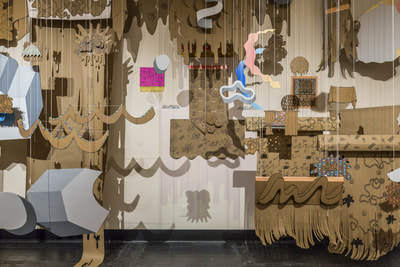