ON BRANCHING BODIES AND THE SUBLIME

This is the curatorial essay from the catalog for Claire Johnson's solo exhibition, a•nas•to•mo•sis.

When young, rivers are restless creatures. They rise and swell, carving a path into the mountains and plains. They form interlacing channels and long plait-like strands. They tear into the earth, dredging up boulders and sediment, carving their way through bedrock and piling sand into small islands. These young rivers lay down a varying pattern of channels described as anastomosis: narrow looping passages pulling apart like an unraveling braid only to weave back together again. Eventually, these branching bodies calm themselves to reconnect and form the wide, slow meander of a mature waterway.

Anastomosis is a term describing a multitude of branching systems, not just rivers, familiar to us in a variety of things - blood vessels, the veins of a leaf, ridges along the tops of mountain ranges, and patterns in sand dunes. The configuration is a fractal. It is the golden ratio, a golden mean, an aesthetic and mathematical formula that forms the basis of perceived beauty, symmetry, and space. But it is a structural schematic, as well. These systems are often the basis of a larger network that serves the purpose of connectivity, whether seemingly related or not. In the case of rivers, leaves, and veins, these systems bring sustenance to far reaches. In the case of man-made roads, bridges, and tunnels, they bring people.

In Claire Johnson’s exhibition of the same name, a•nas•to•mo•sis features a new series of mountainous and aerial landscape paintings exploring contour, pattern, and color formed either by nature or human intervention across the earth's surface. The connection to this investigation of a geographical term is tied to these landscapes in similarities between the branching systems of blood vessels, roads, and river-pathways; linking distant parts or places aren't obviously connected at first glance. These landscapes are an elegant description of anastomosis. But their narratives describe a particular vignette, a specific moment captured in paint the way Johnson remembers feeling at the time.

Hood is likely the most familiar of Johnson’s imagery. Mount Hood is the largest among a scattering of cinder cones and craters along the Oregon range, which include the Three Sisters and Mount Washington to the south. The Pacific Northwest may not be home to the highest elevations above sea level, but these solitary mountains are among the most dramatic in the world. Their towering summits leap high above surrounding peaks and valleys, rising sharply and suddenly. The light bounces off their glaciers and snow packs during the day, and pours itself between long shadows in the valleys at sunset. Hood captures just this moment, when the light briefly reflects a spectrum of purple, pink, and blue hues. The mountain feels like a confection, something sugary and delectable; but the branching ridges of snow and steam rising up from its flanks remind us that this is a magnificent and potentially destructive force far greater than ourselves.

On the opposite end of familiar terrain, Anastomosis (Nevada) is a weird indescribable landform, and unexpectedly my favorite. This bright warm-toned work depicts the most desolate and remote subject of all Johnson’s paintings. It feels more alien than the rich, forested mountains and rippled green landscape of the high plains; yet the connection is evident in its cascading slough, rivulets, and dried vestiges of latticed watercourses. It is a mystery because it is a foreign, hostile, and strange climate. The dangers of a desert are much different but no less deadly than that of a mountain. Anastomosis (Nevada) is lonely, arid, and far from home. Its beauty as an exotically strange place is compelling precisely because of its mystery - is it a dried up lake basin, a salt flat, an ancient sea?

Johnson admits her paintings come from a desire to record, document, and redefine. She describes them romantically, confessing that they are about feeling while pointing out that a formal conversation about feeling becomes awkward; as though somehow, when painters become sentimental, their emotion potentially diminishes the importance of the work. But in this case, the feeling she describes is on such a grand scale of the Sublime that you can’t help but allow it. A world from 35,000 feet in the air is indescribably humbling, and wondrous. In the same way that 18th Century British philosophers acknowledged the very feeling of beauty as accompanied by a sense of awe, terror, and smallness of mankind; Johnson paints this sense of awe in a way that allows us to experience it ourselves.

True to Johnson’s lifetime of work, a•nas•to•mo•sis is a culmination of color, form, truth, and fiction; painted from memory as much as from observation. None are the same place on canvas as they are in the world. These remote locations are filtered through the lens of personal experience, stories, and a moment she is trying to capture, sharing the sense of awe we feel when enthralled by the beauty and sublimity of an endless horizon. 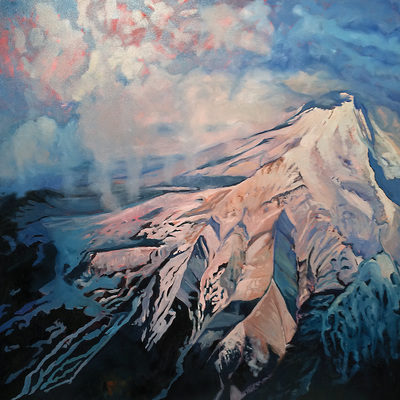 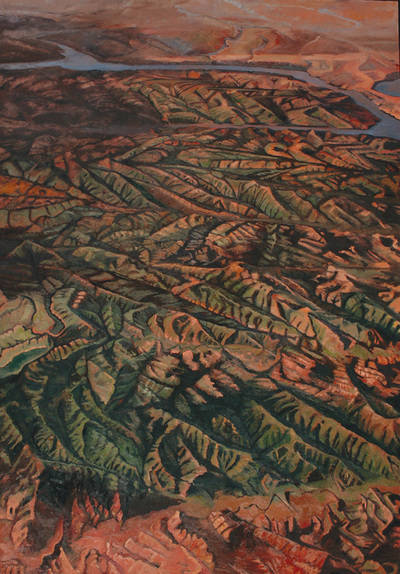 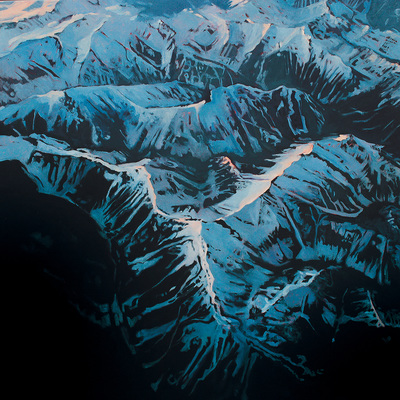 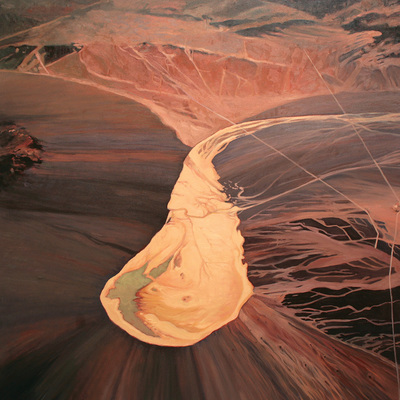 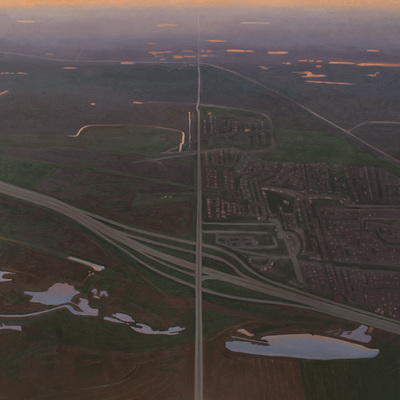