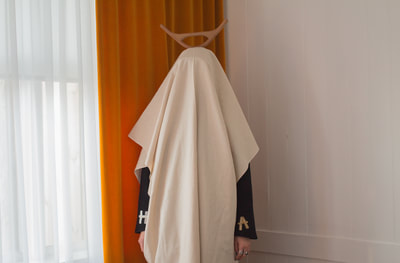 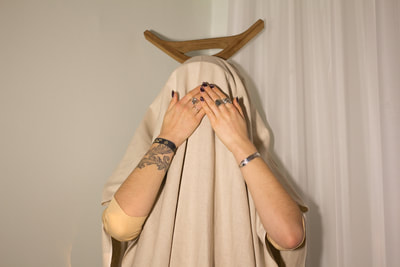 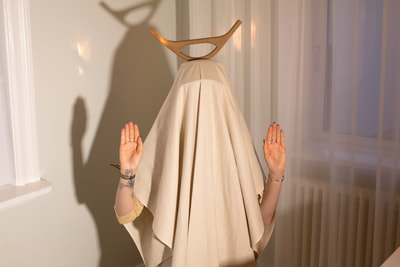 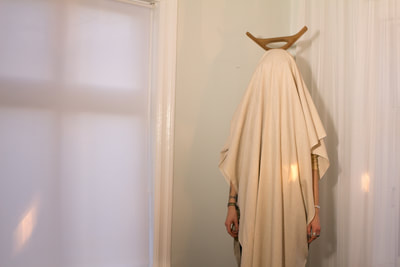 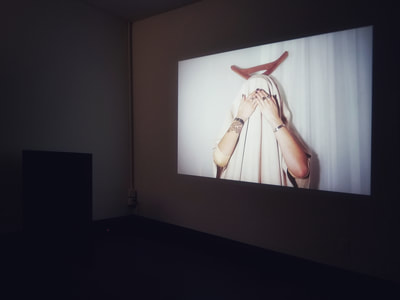 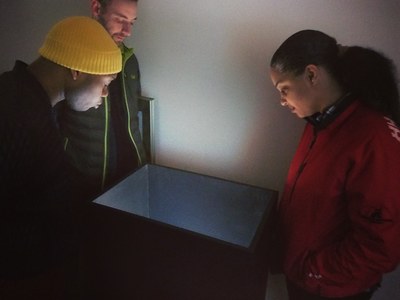 This past February, Bridge Production presented Kat Larson's new chapter of large-scale video installations, Larson's powerful method of storytelling continues to embody messages of love and compassion as forms of contemporary activism against leaders who deplete energy from the Earth and her inhabitants.  Our main protagonist, Lyra, empowers humans with the quest for militant positivity, fighting the good fight through regenerative self care and honest introspection; to ultimately deepen human connections, expand consciousness,  and  commence the great healing of Earth's spiritual crisis. To read more, follow this link to the exhibition page!

For inquiries about Kat Larson's work, please feel free to contact us.
Writings from The Ghost From Vega, December 2016:

In Kat Larson's new series of photographs and video, The Ghost from Vega, she tells the story of a being from another planet who crash lands on Earth. Intrigued by our world, the visitor begins to explore it only to find their strength weakened by the deficit of love and compassion. Their body begins to slowly fade away until, over time, they become a ghost with no means to return home. This intimate, tender story serves as a parable to the power of connection, perseverance, and strength of the spirit. Larson weaves this story into the viewer’s ability to empathize through her compelling and empathetic storytelling.

These series of videos and photography are meant to tenderly evoke a sense of vulnerability and wonder through poetic imagery and sensory experiences. Larson draws on the wealth of material from her personal life, relationships, and milestones to create space for an emotional experience within us, using highly personalized symbolism. In this way, she's able to build a highly visual conversation that is universally relatable. Larson’s deft ability to nurture a reciprocal relationship with us, who are each standing outside the inner experience of another, generates a sense of trust and a kind of internal call and response; a give and take, breathe in breathe out, revealing the work as a mirror. Larson is holding space for a more communal experience, and nurturing openness in the audience which completes the work. These installations create doorways to empathy and empathetic response.

Larson talks about the importance of critically investigating the self, to guide our understanding of each other and the collective human experience. She is guiding us to an investigative space in which we understand our place in a larger universe. Her pursuit of inquiry is philosophical and centered around personal and collective growth. Creating experiences that beckon us to look more closely, and even participate, Larson hones in on themes of timeless moments to heighten the sensory, emotional, and mystical narratives that are analogous between humans.  The slowness and simplicity belies the complexity of her intent, but lends a gravity and focus to the moment of emphasis — whether the backwards movement of her body across a scroll, the paint flowing from her hair to the paper; the endless cascade of water flowing and tumbling in on itself; or a mysterious cloaked figure crouched on the tracks or walking amidst a field of sunflowers; the power of these moments comes in the narrative which conveys as Larson says, “a terroir of self” — stories of sexuality, spirituality, ancestry, and death. They are stories about the the ways humans stand in awe of that which is bigger than us — the Sublime. ​ 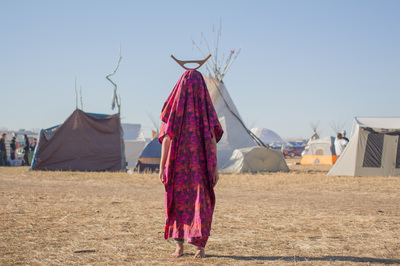 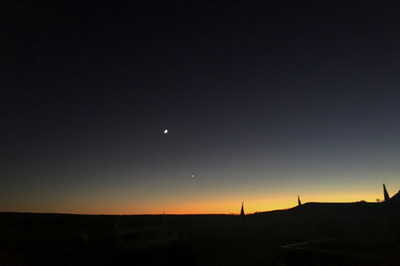 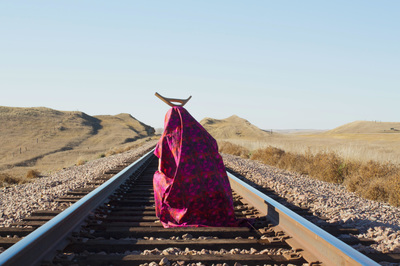 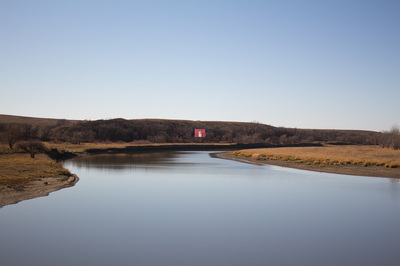 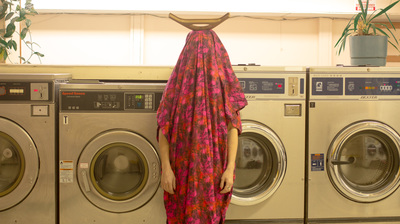 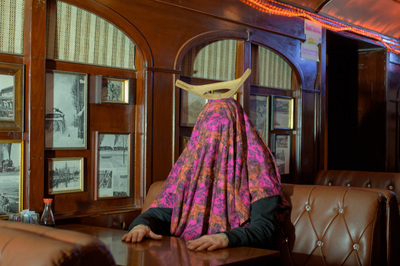 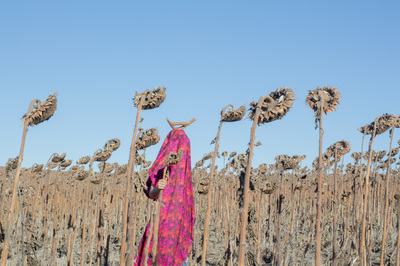 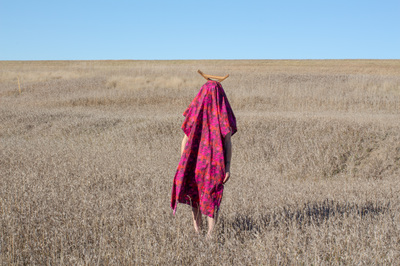 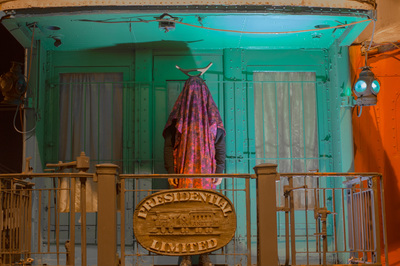 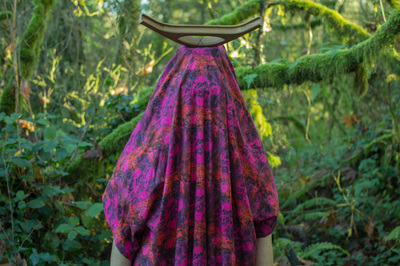 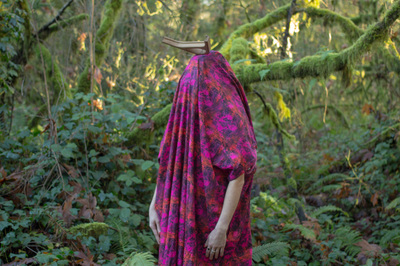 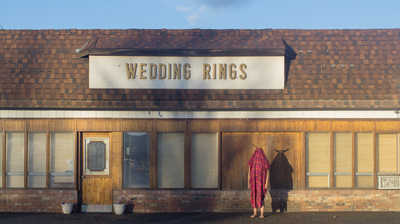 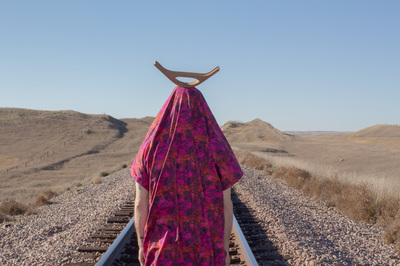 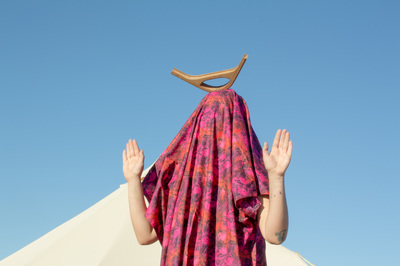 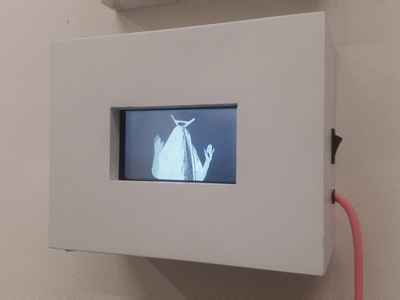 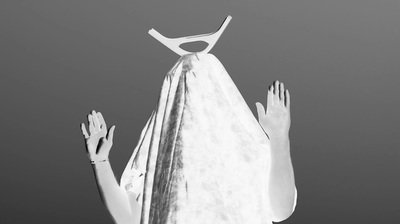 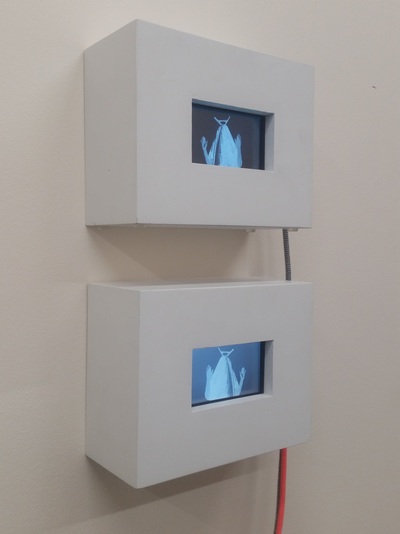 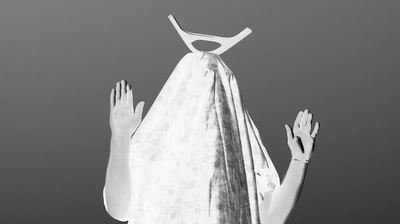 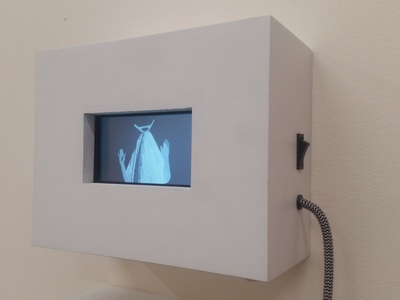 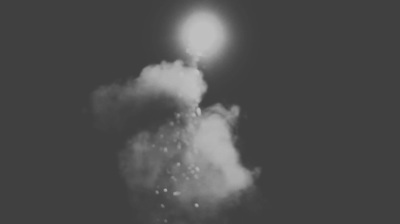 I want to tell you a story about a being who came from Vega, a faraway planet in the Andromeda Galaxy.  On Vega, people are genderfluid and the literal embodiment of emotion, comprised of love and compassion. They’re shape-shifters, truly alien to the limitations of human physics, and communicate telepathically. Despite these differences, Vegans and Humans do have one thing in common:  the desire to dance.

Once long ago, the being was dancing in pure delight (think early Madonna, or Prince, or just any good tune that makes you want to go wild and dance).  They were so steeped in ecstasy they danced right off the planet, floating out of Vega’s atmosphere into space. The being wasn’t frightened because they knew their family could detect them and they trusted they would be found.  So they floated in joy and curiosity through the large expanse of outer space, and eventually into the Milky Way where they were pulled towards Earth by its gravitational field.  Drawn through the atmosphere towards land,  the being crashed. After a moment of adjusting to our gravity, they took a human shape to more comfortably explore our people and places.

The being was incredibly intrigued!  They witnessed  such great potential in humans, that the power of choice all to often created a divergent road for such powers to be misguided.  This saddened the being because very often humans couldn’t get out of their own way to recognize the multitude of creative solutions to their problems.

The longer the being stayed, the weaker they became.  Unable to charge themselves, there wasn’t enough empathy or emotional connectivity on earth for the being to renew their power.  Because of this, they slowly faded away, losing their capability to shapeshift and retain their form.  Eventually, the being’s form completely faded, and they began the long wait for humans to grow in their capacity for emotional depth and meaningful connection to each other.

The Ghost from Vega roams our planet still, waiting for humans to grow and expand in their love and compassion.  The Ghost prays daily for this, so humans may benefit from it, and so they can recharge and become strong enough for their family to read their signal and return home.


The Ghost is a symbol for our individual potential to recognize empathetic connectivity as tools for change,  organizing, and militant positivity.  When we awaken ourselves to this range of human emotion, we can see it is the practice of love and compassion that can unite individuals, and excite change.   I have observed that people often believe love should be tightly rationed. We only distribute emotion to those whom we deem fit for passing our internal gate to the heart, and in this way love can divide people.  Many people will pick up a knife and see a weapon, while others see a tool to slice bread and share with others.  So the heart is interesting in this twofold way: we can use it to close ourselves up from the wider world, or we can use this same heart to produce love that is a tool for the good fight against oppression, uniting ourselves in the darkness.

Most of the images included in The Ghost from Vega were taken at the Oceti Sakowin Camp at Standing Rock.  Big love to No Touching Ground, Josh Stringfellow, Ursula Rose Brown, and the Water Protectors for helping me complete this show.